Immediately following the Online Event, Promise Land opened up Pre-Orders for highly anticipated album, ‘Harmony In Ruins‘ which was announced for a Aug 5th release date.
In addition, the new website was also made public after the event where people could pre-order the album.
Pre-order your copy today at: PL Store

Artwork description: The artwork tells the story of the title and lyrical theme of the album: Harmony In Ruins. The ‘Tree of Life (which now appears dead or dying) coming out of the scroll and showing the result of the fall in the Garden of Eden into modern times, which is depicted by the destroyed city across the water.
Artwork design by Promise Land’s very own, David Michael. 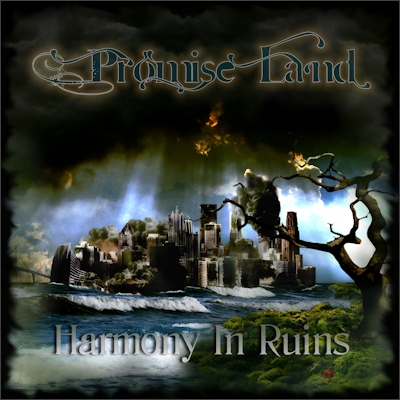 XNilo Records has released an Official Teaser-Video for the upcoming, long awaited, Promise Land album.
In addition, via the teaser-video, the Official album-title has been made public: Harmony In Ruins.

This is the first teaser-video of more to come as we draw closer to the release.
No release date has been announced yet, but it is on the horizon.
Watch video here:

Breaking my Saturday 'Floyd' tradition, today it’s Promise Land – Harmony In Ruins! What a great cd!!!!...they really hit a homer with this cd.

Just Got a hold of Your Album on Spotify…Wow…What a Ministry…ROCK ON IN CHRIST! \m/ Blessings in Jesus Name for You Guys!

The Cd is out of this world. You guys are heaven sent to the Christian metal scene. God bless and keep on rocking for Christ.

Just wanted to commend you guys for an amazing body of work!! Rarely does music make the hair on my arms stand up, but there are several on this album that did. GREAT JOB!

I love it! Turned out awesome, rock’s hard & heavy.... Don’t have words to say how great it is. All of it!- The music The artwork & The lyrics. It was worth the wait.

I hope that your album will be on our radio show in Belgium very soon! Greetings from Belgium guys!

It was not what i expected only better. It is a cd you need to listen to over and over again to gain and again greater understanding of the masterpiece that it is.

What an awesome discovery! Terrific album, guys! Congratulations, and much success for the glory of Jesus …

This cd is great!! I think I have listen to it 20 times already!!

This is some great music. I encourage everyone to take a few minutes and listen.

I can not stop listening to it. If you have not purchased the cd yet, YOU NEED TO, YOU WILL BE HAPPY YOU DID!!!!!!!!!

I came home tonight to find a wonderful surprise in my mailbox. I’m cranking my copy of Harmony In Ruins now and it’s great! A job well done. \m/

It is excellent. The songs and lyrics compliment each other perfectly. Also love the symphonic elements as well as the instrumentals. Great job. Very happy to have the cd.

I have fallen “HEAD OVER HEALS IN LOVE" with this band! ..... The vocals and compositions are amazing and flawless … I will be surprised if major-labels don’t come knocking.

Hey guys I just received my package and thank you for the kind message! Looking forward sharing your CD with my friends and showing off the awesome T-shirt :)